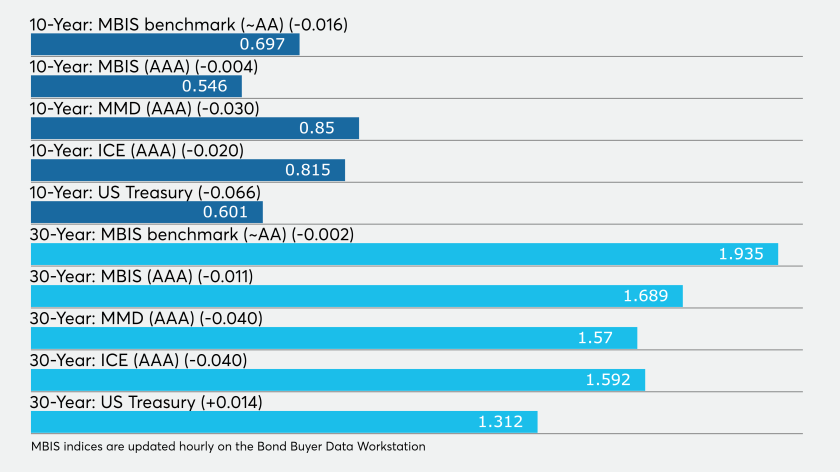 Municipal bond buyers saw a last wave of new supply flow into the market on Thursday. For the ninth week in a row, investors put cash into municipal bond funds as Refinitiv Lipper reported $1.02 billion inflow into the funds in the week ended July 8.

New-issue pricings remain the focus of the market with the secondary taking a back seat as investors digest a diverse set of new deals.

She said that outside of the high-yield sector, July’s heavy reinvestment was seeing issuance of every type being offered.-

“Negotiated results are showing how deep inquiry is in specialty-state credits: Aa2/AAA San Diego Waters priced with a forward settle of February 2021 offered a tight spread of +21/AAA in the 2030 maturity,” she said, adding “Likewise, California’s University System $790 million tax-exempt series priced for retail orders at a flat yield to the implied 10-year AAA benchmark.”

Meanwhile, Olsan noted that volume has grown substantially this year as compared to 2019, due mainly to issuance coming in as taxable debt. So far in 2020, $20.7 billion has priced in the sector (deals over $25 million), with $12.2 billion in taxable munis.

In the same period last year, just $1.8 billion had been priced in taxable bonds. The average taxable deal size has grown from $156 million in 2019 to this year’s $255 million, while tax-exempt deal sizes have moved to just $110 million from $99 million.

She also noted that current spreads show the market’s commitment to higher education, even as it is becoming clearer that many universities will not have an in-person semester this fall and the Ivys already canceled most sporting events. Even so, 10-year BVAL spreads are currently +24/AAA vs. +50/AAA last July, she said.

Primary market
JPMorgan Securities priced the Regents of the University of California’s (Aa2/AA/AA/NR) $2.6 billion of tax-exempt and taxable revenue bonds.

CUSIP: New requests rise in June
Municipal CUSIP request volume increased in June for the third month in a row, according to CUSIP Global Services.

The aggregate total of all municipal securities — including municipal bonds, long-term and short-term notes and commercial paper — rose 14.7% to 1,760 from 1,534 in May. June’s gain came on top of a 53.1% increase in May.

“We’ve been seeing continued signs of healthy liquidity in the municipal bond market for three straight months now, which is a clear indication that municipal borrowers are entering the market in a big way,” said Gerard Faulkner, director of operations for CGS.

Among top state issuers, New York, Texas and California were the most active. New York’s total increased by more than 92% month over month. Pennsylvania and Wisconsin round out June’s top five.

The average seven-day simple yield for the 187 tax-free and municipal money-market funds dipped to 0.02% from 0.03% in the previous week.

The average, seven-day simple yield for the 792 taxable reporting funds remained at 0.06% from the prior week.

Secondary market
In secondary trading, there was a continuation of “an impressive Texas PSF-backed rally, with several prints showing spreads through +10/AAA in short and intermediate maturities,” FHN’s Olsan said. “It’s possible July’s influx of money and a slowing of PSF new issues has caused buyers to push tighter spreads for what are generally AA-rated underlying credits from Texas schools.”

Short readings on MMD’s AAA benchmark scale were unchanged on Thursday while longer-dated munis strengthened. Yields on the 2021 and 2023 maturities were steady at 0.25% and 0.27%, respectively. The yield on the 10-year GO muni fell three basis points to 0.85% while the 30-year yield dropped four basis points to 1.57%.

Munis were little changed on the MBIS benchmark and AAA scales.