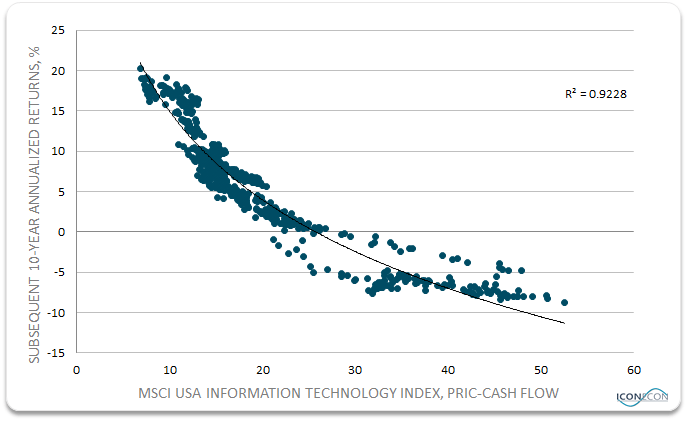 The Nasdaq 100 index (NDX) has continued to defy warning signs in the form of declining market breadth and deteriorating growth prospects, with speculative sentiment driving the index back to its most extreme valuation levels since 2000. While valuation measures remain below the dot com bubble peak, forward-looking return prospects are almost as bad as they were back then due to the much slower potential for earnings growth.

The more that investors pay for stocks today, the weaker long-term returns that will result. The parabolic rise in tech stocks is almost certain to result in multi-year losses for those who buy today. The following chart shows the strong correlation between the price-to-cash flow ratio of U.S. tech stocks and 10-year subsequent returns using data going back to 1996.

Close Correlation Between Valuations And Returns 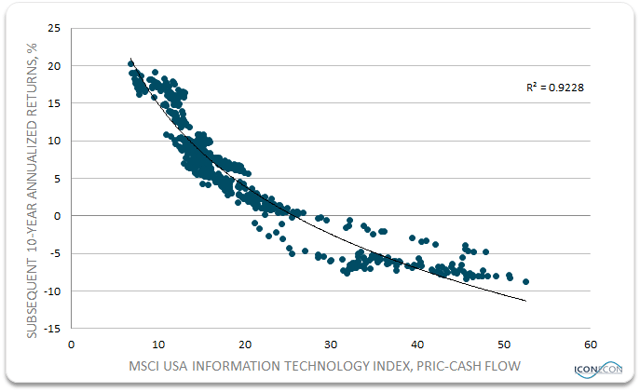 The fact that tech stocks have continued to rise this year despite extreme valuations and weak growth prospects does not invalidate the link between returns and valuations. It simply means that future returns have been brought forwards and will subsequently be even lower than they otherwise would have been. The last time valuations were at current levels, investors went on to lose money over the next 5 years and underperform cash over the next 10 years in spite of rapid earnings and cash flow growth. With earnings growth likely to be far lower than in the past, future returns are likely to be even worse.

Tech Profits Are A Huge Share Of A Shrinking Pie

In the early 2000s Nasdaq 100 earnings were equivalent to just 5% of the entire profits of the MSCI World, total U.S. economy-wide profits, and total SP500 profits. These figures now stand at 17%, 23%, and 31% respectively, reflecting an incredible rise in market share. Furthermore, just six high-flying consumer-focused tech giants account for just under one half of the Nasdaq’s overall earnings. From close to zero 20 years ago, the combined earnings of Apple, Amazon, Facebook, Google, Microsoft, and Netflix have grown to 45% of total Nasdaq earnings and a staggering 11% of total U.S. corporate profits.

Nasdaq Earnings Have Risen Spectacularly Over The Past 20 Years 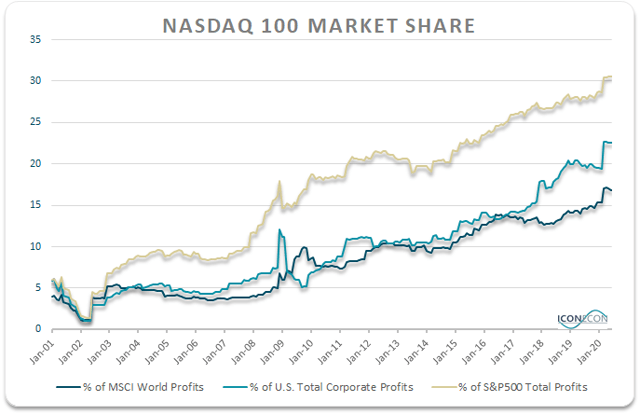 The fact that tech sector profits have risen so much is even more impressive when considering that the U.S.’ net savings rate has remained so low. The link between profits and national savings may not seem immediately obvious but it is crucial to understanding just how distorted the U.S. economy is.

As we explained in a previous article (see ‘The U.S. Has A Savings Problem The Fed Can’t Fix‘) the U.S. has a chronic shortage of savings. To be clear, savings represent all the goods that have been produced in the economy. For example, a television would be considered a consumer good while a computer would be considered an investment good as the former cannot be used to produce future consumption whereas the latter can. The high share of consumer spending in the U.S. economy means that the savings rate sits at just 17.9% of GDP. Net savings, after removing the consumption of capital, or depreciation, sits at just 1.4%. 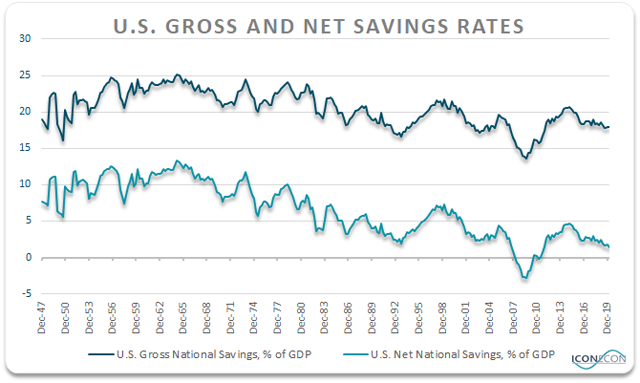 We can break down overall economy-wide net savings into three categories: corporate savings (profits less dividend payments), personal savings, and government savings. All else equal, higher savings across the economy are reflected in higher profits. Meanwhile, for any given level of monetary savings in an economy, the less that the government and individual accounts hold, the more that the corporate sector coffers must hold. The chart below shows the long-term relationship between economy-wide savings and corporate profits. 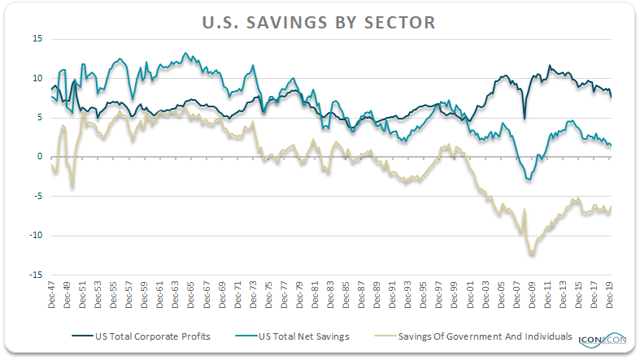 What has been interesting over recent years has been the fact that corporate profits have actually exceeded overall savings in the economy. Furthermore, the profits of the Nasdaq are equivalent to almost the entire economy’s savings over the past 12 months.

The economic and societal implications of this extreme wealth imbalance, and the attempted policy remedies, are likely to be profoundly negative for economic growth and corporate profits. We see five factors which will undermine Nasdaq earnings over the coming years.

Given the large market share of U.S. tech companies relative to the size of the U.S. economy, future growth in market share will inevitably be lower than it has in the past. As John Hussman noted on the prospect for revenue growth in the FAANG stocks:

“Leading companies in emerging industries can experience spectacular growth rates because of the compound effect of rising market share in a growing sector. Let an emerging industry start from a tiny base, and grow at 30% annually for a decade, while a leading company moves from a 10% market share to a 50% market share. The company will enjoy a 10-year growth rate of 52.7% annually. But as companies become dominant players in mature sectors, their growth slows enormously. Let that mature industry double over a decade, while the company’s market share slips from 50% to 40%, and the 10-year growth rate of the company slows to just 4.8% annually… You can’t just look backward and extrapolate. In the coming years, investors should expect the revenue growth of the FAANG group to deteriorate toward a nominal growth rate of less than 10%, and gradually toward 4%.”

The chart below shows how revenue growth across the FAANGs has been a declining function of market size. Profit growth is likely to slow even faster than sales growth given the high levels of profit margins and their likely mean reversion that should occur as sales growth slows.

Sales Growth Is A Declining Fuction Of Market Share 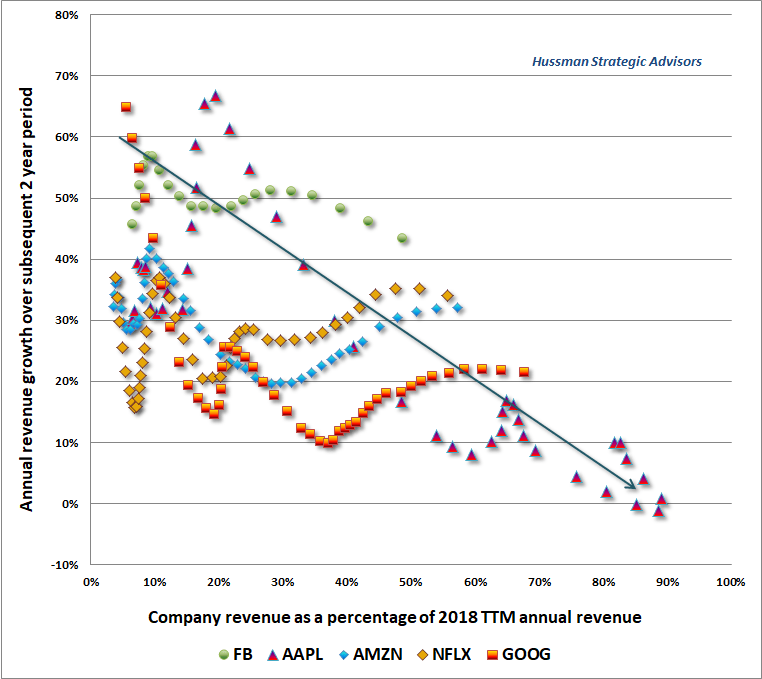 The lopsided nature of economic wealth, and the remedies that are put in place to resolve it, raise the economy’s susceptibility to economic shocks. The low levels of econmy-wide savings means that corporate profits are increasingly dependent on large budget deficits and transfer payments. Any increased desire on the behalf of individuals to save would risk a decline in corporate profits and output. In order to prevent this the government continues to raise its fiscal deficit, and in doing so it raises the risk of a destabilising surge in inflation or a spike in bond yields.

While the rise in government spending and reduction in taxes have helped to support corporate profits, they have also led to a reduction in overall savings in the economy. As the chart below suggests, the widening fiscal deficit has gone hand in hand with the fall in the U.S. savings rate over the long term, as rising transfer payments have enabled consumption’s share of GDP to rise far in excess of household income. 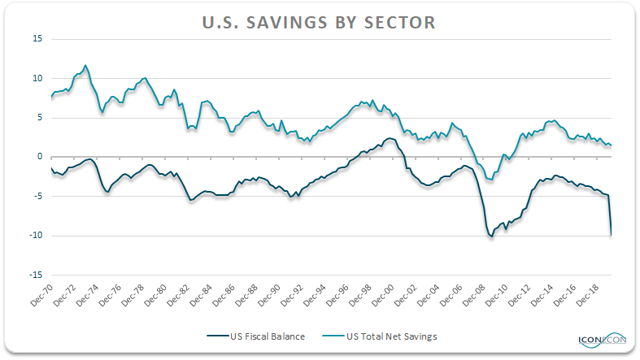 While large deficits may seem like they have benefitted corporate profits, and they have to an extent, they have done so by giving the corporate sector an increasing share of a shrinking pie. Over the long term, the low level of saving is an impediment to future productivity and real GDP growth. While the efficiency of investment has increased greatly over time enabling more output for any given level of saving, savings remain the bedrock of productivity growth. The slow grind lower in productivity growth over recent decades has occurred alongside the decline in the savings rate, while the U.S.’s subpar infrastructure is a concrete manifestation of the low level of savings.

An additional problem with the extreme divergence in wealth represented by the rising share of the tech sector relative to GDP is that it breeds the kind of resentment towards capital owners and mistrust in capitalism that recently manifested in rioting and looting across the nation’s cities. As the government responds to economic and social unrest with increased welfare spending and debt monetization, the social mood and economy are likely to deteriorate further for reasons explained previously in ‘Buy When There’s Blood In The Streets, Unless We’re At Record Highs‘

5) Growing Threat Of A ‘Woke’ Backlash

An important dynamic at play over the past few months has been the implicit and explicit endorsement of protestors by the corporate sector and media which has given a sense of legitimacy to mob violence and vandalism. Determined to appease the mob and avoid being cancelled, boycotted, or having there stores looted, companies risk stoking an anti-woke backlash as Gillette witnessed last year. Social media companies in particular face a potential regulatory backlash owing to their increased censorship of content on political grounds. We could see the social media sector become subject to increased regulation and compliance issues over the coming years to the detriment of profits.

Another Lost Decade Is Highly Likely 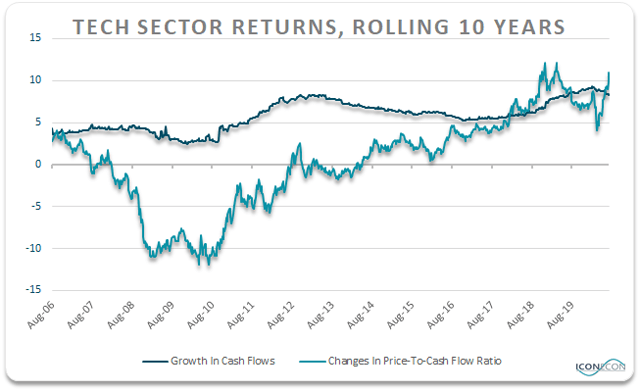 As earnings and cash flow growth slows towards the pace of nominal GDP growth, downward valuation mean reversion will likely result in negative returns until at least 2030. This is illustrated on the chart below. The dark blue line shows the trailing price-to-cash flow ratio of the MSCI USA Information Technology sector which closely tracks the NDX, read of the left side axis. The light blue line shows the market’s subseqent returns over the next 10 years, read off the right hand axis. The gold line shows the expected returns in the event that cash flows growth converge towards nominal GDP growth, again read off the right hand axis. 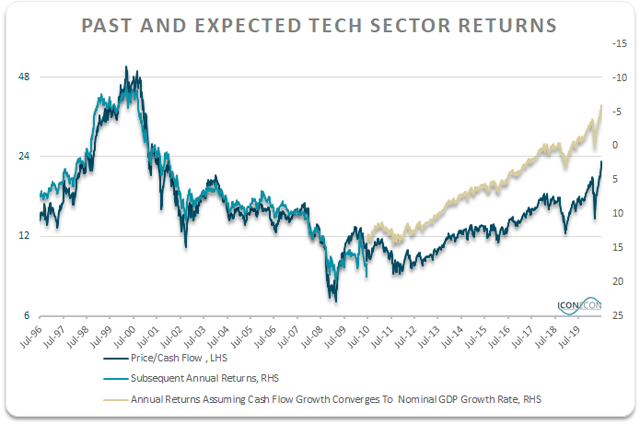 The upshot is that even if we get continued rapid earnings and cash flow growth over the next decade, we are still likely to see only ~2% annual returns, whereas if growth slows to the pace of the overall economy we are likely to see -6% annual returns. This is slightly better than the returns that followed the 2000 peak, but still represents a trully awful investment prospect.

Disclosure: I am/we are short NDX. I wrote this article myself, and it expresses my own opinions. I am not receiving compensation for it (other than from Seeking Alpha). I have no business relationship with any company whose stock is mentioned in this article.