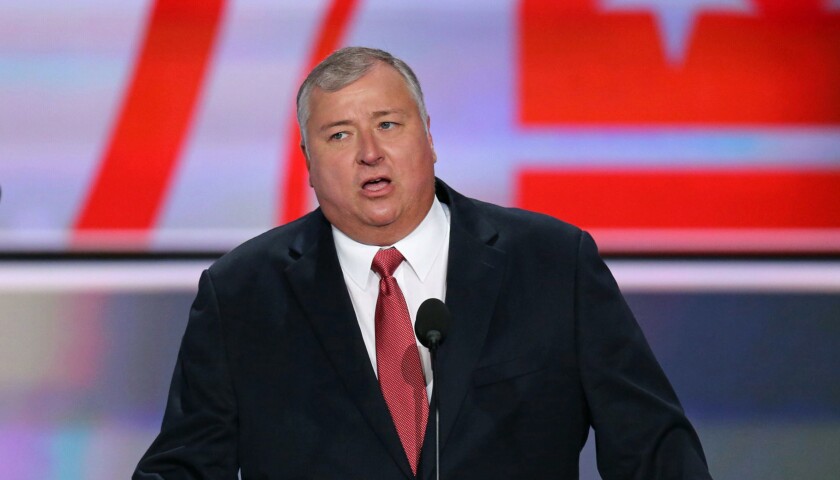 Ohio legislation that provided a ratepayer bailout for two nuclear power plants owned by then-bankrupt FirstEnergy Solutions is at the center of a $60 million pay-to-play scheme that led to the arrest of Ohio House Speaker Larry Householder on federal corruption charges this week.

The legislation, signed by Gov. Mike DeWine in July 2019, bolstered the firm’s restructuring plan and in so doing improved the trading value of some of First Energy’s secured municipal bonds that had been dragged into the bankruptcy case.

The legislation created an upside for holders of about $2 billion of tax-exempt pollution control notes issued or backed by FirstEnergy because it enhanced and assured what could be recovered under the company’s Chapter 11 reorganization, the late municipal bond restructuring expert Jim Spiotto said at the time. It slapped surcharges on energy customers in Ohio to, among other things, support the money losing nuclear plants.

Householder and others accepted bribes between March 2017 and March 2020 to steer passage of House Bill 6 and to help stave off a public ballot initiative that would have overturned the legislation.

“These allegations are bribery pure and simple. This was a quid pro quo. This was pay to play,” U.S. Attorney for the Southern District of Ohio David M. DeVillers said in a news conference announcing the charges along with other federal agencies.

“All forms of public corruption are unacceptable,” said Chris Hoffman, FBI Cincinnati Special Agent in Charge. “When the corruption is alleged to reach some of the highest levels of our state government, the citizens of Ohio should be shocked and appalled.”

Four others — lobbyist and former state Republican Party chairman Mathew Borgest, political strategist Jeffrey Longstreth, and lobbyists Neil Clark and Juan Cespedes — also face charges in the 80-page criminal complaint along with the not-for-profit Generation Now. The organization received the funds from an unnamed company and allegedly funneled the bribes to the individuals.

FirstEnergy is not named in the complaint but it was the primary beneficiary of the legislative bailout, federal authorities confirmed.

“This afternoon, FirstEnergy Corp. (NYSE: FE) received subpoenas in connection with the investigation surrounding Ohio House Bill 6. We are reviewing the details of the investigation and we intend to fully cooperate,” the company said in a statement.

Energy Harbor, the successor company to FirstEnergy Corp.’s subsidiary FirstEnergy Solutions that went through bankruptcy , said in a statement: “We are reviewing the complaint and will cooperate fully with the government’s investigation.”

FES changed its name to Energy Harbor after it emerged from its 2018 Chapter 11 restructuring in February. It operates the nuclear plants and is no longer affiliated with FirstEnergy Corp.

The investigation is ongoing and how it might eventually impact the reorganized company and its debts is not clear. The Securities and Exchange Commission declined to comment on whether it was examining the situation and the impact on the company’s securities at the time the legislation was passed.

Longstreth incorporated Generation Now as a 501(c)(4) social welfare entity in 2017 to promote energy independence and economic development. It was secretly controlled by Householder, according to the complaint.

In March 2017, Householder began receiving quarterly $250,000 payments into the bank account of Generation Now. “The defendants allegedly spent millions of the company’s dollars to support Householder’s political bid to become Speaker, to support House candidates they believed would back Householder, and for their own personal benefit,” officials said.

The scheme included campaign support for candidates who eventually went on to endorse Householder’s bid for speaker and the speaker allegedly received more than $400,000 in personal benefits from Generation Now, including funds to settle a personal lawsuit, to pay for costs associated with his Florida home, and to pay off credit card debt. Funds also went to efforts to halt signature collections for a potential ballot initiative to overturn the legislation.

The racketeering conspiracy charge is punishable by up to 20 years in prison.

The legislation replaced a ratepayer surcharge for renewable power with one that subsidized the two nuclear generation facilities. It imposes a fee of 85 cents a month on residential ratepayers from 2021 through 2027, generating about $170 million a year with $150 million benefitting the Davis-Besse and Perry nuclear plants and the remaining funds going to solar development.

The Bond Buyer reported in July 2019 that passage provided a boost in the value of some FES bonds based on a review of trading activity and could benefit the payout in bankruptcy. “The anticipated $150 million to be given every year to First Energy Solutions to subsidize its nuclear power plants from the surcharge to be collected from 2021-2027 has been taken as a positive by bondholders,” IHS Markit told The Bond Buyer.

Prior to the legislation’s passage, First Energy secured bonds were evaluated by IHS Markit at a price of 90 cents on the dollar but they rose to the 94-94.5 cent range on July 23 and 24 based on observable trade/quote data. DeWine signed the legislation into law on July 23.

The company had $1.5 billion of unsecured debt and $690 million of secured municipal debt. The private power plant operator sold the tax-exempt debt to fund air and water pollution control facilities and sewage and solid waste facilities at its power generation plants. Without the bailout, FES planned to shutter the plants.

The company emerged from Chapter 11 in February after shedding $4 billion in debt. FES changed its name to First Harbor and operates independently. Bondholder-creditors Avenue Capital Group and Nuveen Asset Management LLC are major holders and have seats on the board, according to company disclosures.

Secured bond claims were not impaired and the bankruptcy disclosure document reported recovery rates for allowed unsecured bondholder and note claims of 13.5%, 22.9%, and 30.2% depending on the claim.