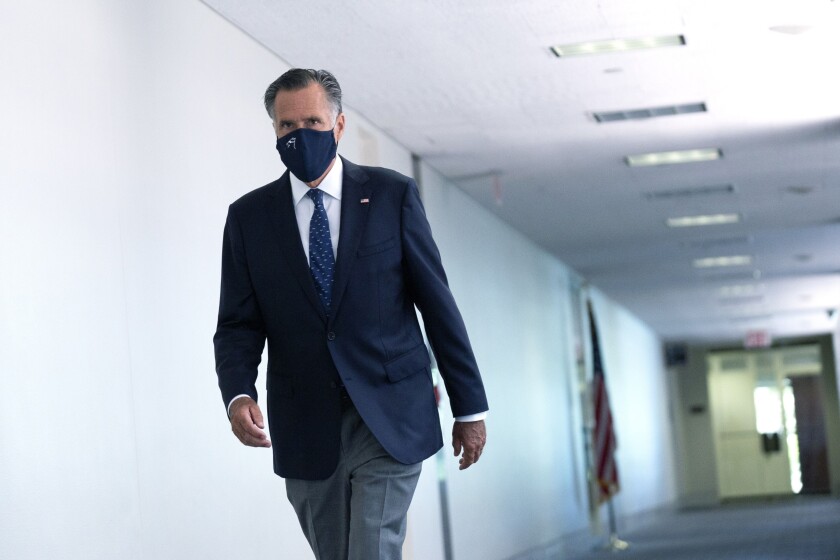 Republican Sen. Mitt Romney of Utah said he will vote against Judy Shelton, one of two Trump administration nominees to the Federal Reserve’s Board of Governors.

”I’m not going to be endorsing,” Romney told reporters Thursday. “I will be voting against it.”

Shelton, an informal adviser to President Trump’s campaign in 2016, is nominated along with Christopher Waller, a director of research at the St. Louis Fed. They both won the support of a majority on the Senate Banking Committee on July 21.

The two now require majority approval by the full Senate. If, as expected, Democrats vote in unison to reject Shelton’s candidacy, her confirmation could be blocked by Romney and three additional Republicans voting against. No floor vote has yet been scheduled for either nominee.

Sen. Lisa Murkowski, the Alaska Republican who has sometimes bucked her party in the past, indicated that she is likely to support Shelton’s confirmation.

“Right now I’m leaning toward it,” Murkowski said. “I have a few more things I want to read, probably tonight. But right now, yes.”

Shelton is regarded suspiciously by many in central banking circles for policy views that are well outside the mainstream — including a history of admiration for the gold standard — and for being a political loyalist who might bend to Trump’s will. Shelton appeared to abandon her longstanding advocacy for ultratight monetary policy when she emerged as a Fed candidate, publicly aligning herself with the president’s calls for lower interest rates.

Waller is widely expected to receive majority support with some Democrats supporting his confirmation.

Shelton critics fear most, however, that she might be picked for the Fed’s top job when Powell’s term expires in 2022 if Trump is re-elected. Such a promotion would require another confirmation by the Senate.